Almost fifty members with partners and friends attended this splendid lunch on a lovely sunny winter’s day. Once again the venue was the perfect blend of history, warmth and beautiful Christmas decorations. The staff were welcoming, helpful and efficient which made the event very relaxing and enjoyable for both organiser and guests. We were welcomed with a glass of mulled wine or fruit juice. After pulling our crackers and exchanging the jokes we all enjoyed an excellence 3 course meal followed by warm mince pies and coffee or tea. There was the usual WI raffle with special Christmas prices that included Belgian chocolate biscuits, Prosecco and the lovely cyclamen that had decorated the tables.

Many thanks go to Hortense for all her hard work arranging this event ! Also to her husband Gerald for taking the pictures you can see in the gallery below.

Members, husbands and friends gathered in the Lads’ Club on November 23rd to enjoy another of our Winter Warmer Soup Lunches. This time the soup was Leek and Potato and was accompanied by bread, butter, cheese and chutney. A contented hum was heard as we settled down to chat with friends old and new and to enjoy the delicious soup. Kay Hygate thanked the committee for organising the lunch and for making and serving the soup. Thanks, must also go to Kay and Chris Hygate and Michael Daisey for putting out the tables and chairs. 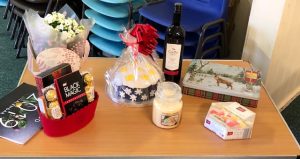 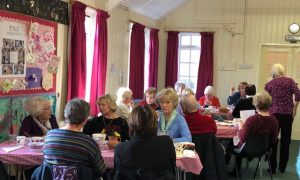 On Thursday 25th October Kate Dilks, Daphne Gazely, Barbara Thorburn, Marjorie Mitchell and Margaret Alcock took part in the annual EKFWI Top team Quiz. It was for teams of 6 but we could only muster 5 however, we did our best. The questions were interesting and varied and when the answers were given out we sometimes kicked ourselves, groaned and wondered how we could have been so stupid. Nevertheless, we scored 67 points out of a possible 80 and (according to your correspondent who was on the team) we came joint 9th out of 24. The winners scored 74 points. The most fiendish round was when we were given cryptic clues for the most obscure London Tube stations.
It was a very pleasant afternoon (with refreshments) and we will be putting in a team next year with, hopefully, a full complement of 6.

Nine members accompanied by fourteen husbands and friends, travelled to Chatham Historic Dockyard on a misty morning. The journey was good and our first port of call on arrival was the restaurant where coffee/tea and biscuits awaited us. Refreshed, we boarded the coach again for a forty-five-minute tour of the dockyard during which our knowledgeable guide pointed out the many interesting buildings and ships and regaled us with stories about them. After lunch most of the group joined what was the highlight of the visit, the Call the Midwife tour. We were greeted at the meeting point by a “midwife” who took us on a very interesting tour, pointing out the various locations where the show is filmed and showing us photographs of scenes at each location. We saw the exhibition of props from the series (including an iconic bicycle) and saw some very realistic exterior props, very solid looking doors which were in fact made of plywood. We all agreed that this had been a very good day out. 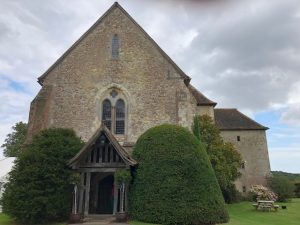 Bilsington Priory is a former Augustinian priory in the village of Bilsington, Kent.

It was founded in 1253 and suppressed in the Dissolution of the Monasteries in 1536.
Some of its buildings survived and were converted into a farmhouse. In 1906 they were restored to designs by JT Micklethwaite. They are Grade I listed.
The priory is now a wedding and conference venue. 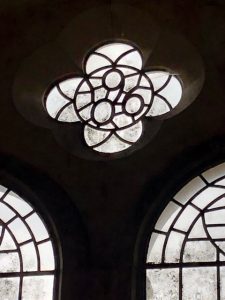 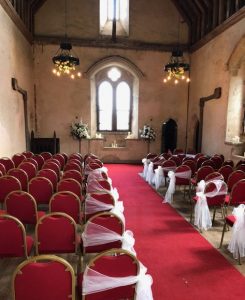 16 of us arrived at the car park at 2pm to be greeted by Zena and led up to the priory.
Zena gave a very interesting and informative talk on the history of the priory. She explained that she has worked at the priory for 20 years and has become an avid amateur historian. After speaking for 35 minutes she showed us round the building and explained the various features.

At around 4pm we were shown to the conservatory where tables were laid for afternoon tea. 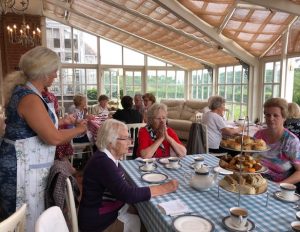 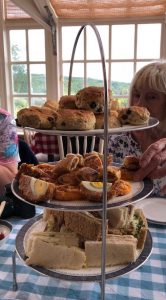 There were pots of tea, or coffee if you preferred, with brown and white dainty sandwiches, sausage rolls, scotch eggs and cheese pinwheels. There were plain or fruit scones with jam and cream. Also, a large selection of cakes including mini Bakewells, lemon drizzle cake, mini Victoria sponges, macaroons and mini coffee and walnut cakes. We all had our fill and we were even given doggy bags to take home.
The only blot on the afternoon was a couple of pesky wasps who wanted our jam!
A lovely time was had by all. 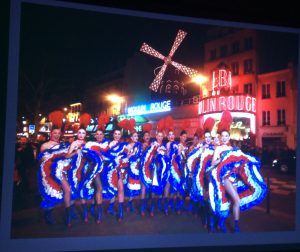 5 members of our WI along with members from South Hythe and Smeeth attended this group meeting, where they were entertained by  speaker Michael Herd with a talk entitled “Can-Can, High Kicks and Frilly Knickers”. 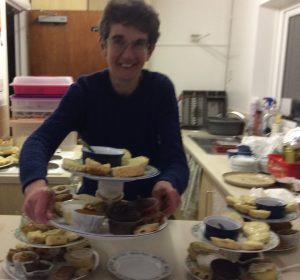 The competition was for a pair of frilly knickers in any medium. 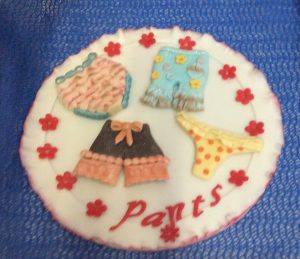 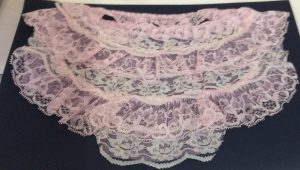 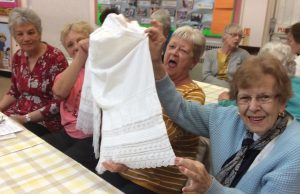 The proceedings opened with a rousing rendition of Jerusalem accompanied on the piano by Castle Green member Margaret Ritchie.

The meeting was chaired by acting chairman Gill Crone assisted by some of the trustees including – Dorothy Douse – Federation Treasurer and June Kirk – Federation Secretary. Mayor Roger West welcomed members to a very rainy Folkestone.

The business part of the meeting included the financial statement for the year ended 30th September 2017 and a short talk from the Financial Adviser engaged to invest the funds from the sale of Beer Cart Lane.

It was announced that the next ACM will be held on 25th March 2019 at the Leas Cliff Hall and as it will be EKF’s centenary year Lynne Stubbings the NFWI Chair will be attending.

The first speaker Sherrie Hewson was unable to attend on the day and was very ably replaced by Jennie Bond. Jennie gave a highly entertaining  talk on her days as a reporter and newsreader with the BBC. She told us many amusing anecdotes mainly focused on her time as a royal correspondent  from 1989 – 2003. She had reported on many dramatic and notable Royal events, including the divorce of the Prince and Princess of Wales.

Jennie had travelled extensively with the Royal family: with Diana, Princess of Wales on her trip to Angola, with the Queen on her first official visits to Russia in 1994 and again a year later when she met Nelson Mandela in South Africa. Jennie said that she felt that she had become ‘close’ to Diana and that her death came as a great shock. Jennie had instigated her first meeting with Diana by sending her a note, suggesting that if she were to report on Diana ‘properly’ then she should at least get to know her character and not base her thoughts on stories that were appearing in the press. She commented on that first meeting at Kensington Palace: “Princess Diana was charming, articulate, fresh, interesting, but manipulative. She knew I was a journalist. This was no girlie-girlie meeting.”

Jennie told a very amusing story about a visit Prince Charles had made to the Falklands and Argentina. On the last day he visited an island inhabited by elephant seals that had an excessive wind problem – from both ends! Apparently the Prince had difficulty in keeping a straight face when he mentioned the seals’ flatulence problem to the journalists on the plane back to the UK.
Jennie ended by telling us about her time on ‘I’m A Celebrity Get Me Out of Here’ saying  how much she enjoyed the experience and that she had raised over £200,000 for the Devon air ambulance by appearing on the programme.

At lunch time there was an opportunity to check out the sales tables with various items on offer including jewellery, scarves, handbags etc. Members were also able to purchase one of the baskets the various WI’s had made up. All had a theme of some kind, eg. gardening, food, sweets, make-up etc. They were all very well done and looked tempting. 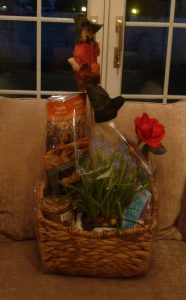 This is Castle Green’s basket of garden goodies, that was snapped up by a very happy customer.

After the presentations came the second speaker Chan Jeer, a Consultant Orthopaedic Surgeon who specialised in knee replacement surgery. He gave a very interesting and informative talk with amusing cartoons and anecdotes on the pros and cons of knee surgery. I’m sure many of us who are a certain age have or will have to cope with this operation sooner or later. His lively talk gave us an insight into what to expect, what to look out for and how to prepare by getting fit for knee surgery.

This took us to the Denman Draw, 200 Club Draw and the famous Raffle.
The meeting was formally closed and then the the new Board of Trustees and Officers were announced with Gill Crone being the permanent Chair for the next two years.

All in all, a very enjoyable day!

Forty- seven members and guests gathered in the Lads’ Club on January 26th to enjoy another of our Winter warmer lunches. 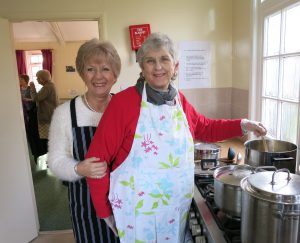 The soup made by WI ladies was warmed through in the kitchen to be ready for serving. 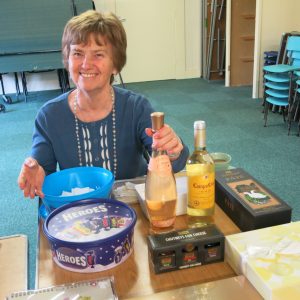 When everyone was settled the soup was served which this year was potato and leek accompanied by as usual bread and an innovation, cheese, and chutney. The soup recipe is our next recipe of the month . Click here for the details. 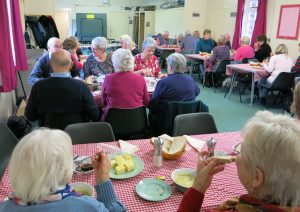 A contented hum settled across the room as we tucked in and chatted with friends old and new. When everyone had had their fill tea and coffee was served.

Brian Doorne gave a vote of thanks to all those who had organised the lunch and helped in anyway.