Weather report for Monday December 11th, 2017. It was very cold, very windy and snowing but undeterred, 49 members and guests made their way to Lympne Castle. Divesting ourselves of many layers of coats, hats, gloves, and scarves we made our way to the dining room where a roaring log fire and mulled wine greeted us. The tables were adorned with beautiful Christmas arrangements which Mary Wheatley had made. 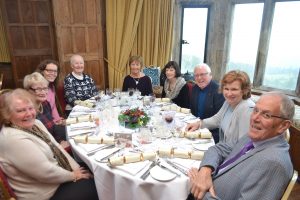 There was a buzz of chatter as we pulled Christmas crackers and groaned at the jokes, which died down slightly when our starters arrived, rose again and the died away when the next course arrived. 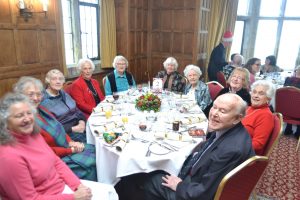 No WI event is complete without a raffle and the lucky winners were able to choose one of the table decorations or a bottle of sparkling wine. 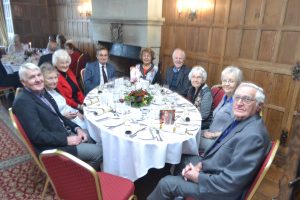 The meal concluded with coffee and mince pies. Sheila Daisey thanked Patricia Robinson on behalf of us all for arranging the lunch.

So, we bundled ourselves up and braved the elements once more although by this time the snow had stopped and it was just a miserable a cold drizzle. 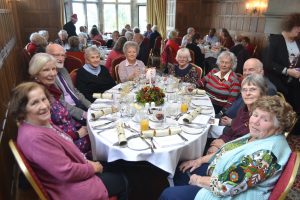 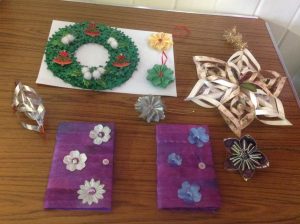 Early on Wednesday 8th November four Castle Green WI ladies set off to Chartham Village Hall to attend the crafts work shop. Other Castle Green members had made their own way to the hall. It started at 10.00 am and went on until 3 pm. We were surprised to see a very full car par, but found the last space. The day cost £ 10 and was fully booked.

We were registered and sent off to our various craft tables. Dee was assigned to the Christmas decoration group, Kay to the Christmas wreaths made with unusual materials ( jig saw pieces) and Patricia and I to the fabric book table.

Other crafts on offer were Chocolate Christmas decorations, spinning, making an Elf on a Shelf and other decorations and working with gold thread.

Patricia and I had an excellent tutor who instructed us on our craft. We were given a pack with silk strips, sheets of paper, thread and decorations. (This cost an additional £5). We had to iron  the strips of silk on to card which was covered with adhesive. Then the hard work started: all the strips needed to be embroidered on to the card with a cross stitch. This took all morning! Then we were given double sided sticky tape which was to be stuck on the the reverse side of our silk work to hold on the first page. This was extremely frustrating and it was nearly impossible to peel off the plastic. Patricia nearly threw her work across the room!! After some help with the task we had to sew in the pages and decorate the front cover with floral decorations. A button and a ribbon were then sewn on to be able to close the book.
We completed our books just in time at 3pm.

It was a very enjoyable and social day and I will certainly attend again next year.
Jacqueline Vickerman. 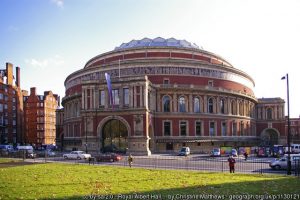 On 28th September Castle Green WI went on a visit to the Royal Albert Hall. On arrival at 11am the group was welcomed and split into 2 groups, each with a guide, for easier access to the various areas explored.

Areas not usually accessible to the general public were visited and it was fascinating to see and hear about the organisation behind the scenes. There is a maze of corridors, dressing rooms and store rooms under the Hall, which would be very easy to get lost in. The auditorium in red and gold looked so beautiful as seen from a box not far from the Royal Box. The stage was not permitted and a security man was there to ensure the safety of instruments arranged there for the evening concert of Diana Krall.

After a good lunch in the Italian restaurant in the Royal Albert Hall, the tour was continued in the upper part of the building,  where anecdotes of ghostly sightings  of Victorian ladies were recounted, but none appeared that day !

The guides were very good and really knew the building and its history as well as the day to day organisation of the beautiful building that was the brain child of Prince Albert, who sadly died before its completion.

This most enjoyable visit ended at 3.30pm and everyone agreed what an excellent trip it had been.

On Friday 28th July between 11.30am and 11.45am a steady stream of ladies (and some gentlemen) carrying large bags and assorted containers were to be seen making their way up Rectory Lane to the Lads’ Club. Some passers by may have wondered why, others may have thought, “Ah yes, Castle Green’s annual Pot Luck Lunch and they would have been correct!

On arriving at the Lads’ Club, the bags and containers were unloaded to reveal a mouth-watering array of salads, quiches, cold meats, and sea food which were put out onto the tables while the desserts were tucked away in the kitchen. 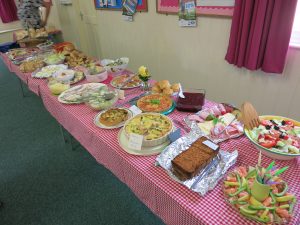 Forty-nine members, husbands and friends sat down and waited for our President Gill Roffey to welcome us and then in a very orderly fashion lunch commenced. The noise level dropped a little whilst we all tucked in and then as it rose again the tables were cleared and the delicious desserts were put out. What a choice! Meringues, fruit salad, gateau, tarts and of course, cream. 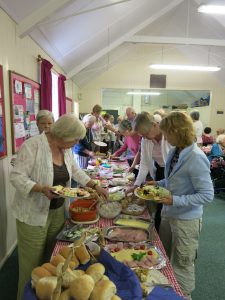 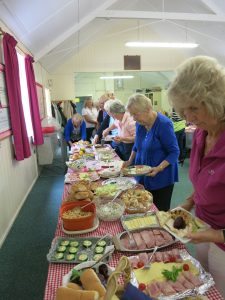 Brian Doorne on behalf of the guests thanked the committee for their hard work and the members for the lovely food and this was heartily endorsed by everyone. And so, the bags and containers were repacked (much lighter) and we made our way back down Rectory Lane having had an excellent lunch with our friends, a fine example of one of the main ideals of the WI, friendship.

Two members of Castle Green WI attended the Birthday meeting of Stanford with Postling on 17th July. It took place in the marvellous setting of rural Postling Village Hall on a perfect Summer’s evening. 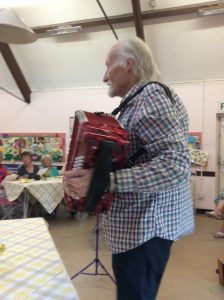 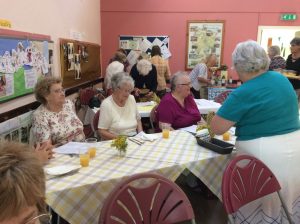 Everyone was entertained by Les and Jane singing folk songs on various accordions. Audience participation was the main focus of the evening followed by scones and cakes. The evening was a step back in time when the pace of modern life was completely forgotten.

Five members of Castle Green WI attended Mersham’s birthday meeting on Monday 10th July. We anticipated a fantastic supper and were not disappointed! 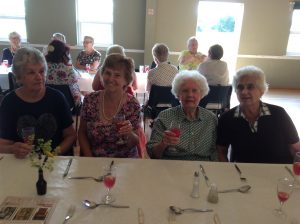 We have to congratulate Mersham WI on producing a wonderful array of savouries, salads and sweets. The meeting concluded with George Taylor and Peter bringing back memories of songs and facts about the 1950’s. Nobody present could resist singing “How much is that doggie in the window” and “I’m pink toothbrush, you’re a blue toothbrush”!

In June Kay Hygate had been our delegate at the WI AGM in Liverpool and gave us a very “enlightening” report. During the coach journey to Liverpool Kay had made friends with 2 other delegates and on arrival they decided to explore the city. They ended up dancing the night away at the Cavern Club! On returning to their hotel they somehow managed to get lost and ended up in the kitchens where they were offered a job.

The next morning along with approximately 6000 delegates and friends they made their way to the Echo Arena and the meeting started with the singing of Jerusalem. They were then welcomed by the Mayor of Liverpool and the National Chairman Janice Langley. Membership of the WI stands at approximately 225,000 in 6,300 Institutes (so don’t mess with us!).

The first resolution to be debated upon was about alleviating loneliness. Some speakers were concerned that wording of the resolution was ambiguous but it was passed with a 69% majority. The first speaker of the day was Jo Fairley co-founder of Green and Black’s chocolate but alas, there were no free samples.

The next resolution dealt with Plastic Soup in the oceans. There was much informed discussion on the subject and the resolution was passed with a 98.9% majority. The afternoon speaker was Susie Dent from Countdown and what better way to end a meeting held in Liverpool than to be entertained by a Gerry and the Pacemakers tribute band. Kay thought they were surprised when the audience were singing along and dancing in the aisles. Probably not what they expected from the WI! Kay had arrived home at midnight and written her report on the coach home. Many thanks, Kay. Next AGM 6th June 2018.

This time it was Castle Greens turn to host the Group meeting, which was held on the 25th April 2017 at 2.30pm in the Lads’ Club in Saltwood.

Guests from Lympne, Mersham, Smeeth, Stanford with Postling and South Hythe WIs along with members from our own Castle Green attended.

During the business part of the meeting we all heard what our sister WI groups had been up to over the past few months, which seemed quite often to involve the enjoyable activity of sharing food together.

An interesting talk with slides was given by Nicholas Reed – entitled the ‘Murder at the Priory’. Nicholas has spent many years trying to unravel the mystery of the murder of  the successful Victorian barrister Charles Bravo. Despite investigations and an enquiry at the time of the murder no one was convicted. Since that time there has been much research and speculation with several books published putting forward various theories. We will all have to wait until the end of this year to read his new book to see who Nicholas has concluded was the murderer at the priory.

Once again we all enjoyed sharing tea and the delicious cakes generously provided by our members and served by committee members. Many thanks must also go to our very able refreshment officer for all her hard work and efficient organisation during the afternoon.